Nigerian singer Davido has put a smile on the face on one of his loyal fans called Odukoya Wasiu Abiodun.

Abiodun was the artist who edited the photos of the Blow My Mind singer and his colleague Wizkid in the viral post that seemed to have started the controversial drama on social media. 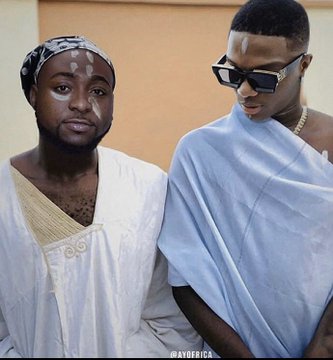 The photo had Davido putting on traditional wear called agbada with a cap on his head. One could spot stains of white chalk on his face too.

Beside Davido is the Ojuelegba singer who also had stains of white chalk on his head and a white wrapper tied around him.

The father of three seemed to love the photo so much that he reposted it on his social media platform with the same caption.

That was not all, the singer went ahead to gift Abiodun the sum of N1.1m for the image.

According to entertainer Tunde Ednut who first reposted Abiodun’s image, Davido sent him the young man the sum of N100, 000 on Friday, May 22.

He revealed that Davido requested for Abiodun’s account number again and dashed him another N1m. Abiodun who couldn’t believe his good luck shed tears of joy.

In the video posted online, the young editor was seen thanking both the singer and Tunde Ednut who first reposted his image.

The Blow My Mind crooner posted a photo of him from secondary school. There is no denying where the father of three stood in the photo.

The photo showed Davido and his three other friends in their school uniforms.

The boys who have now become men were spotted in black trousers, white shirts, green jackets, and striped ties to match.