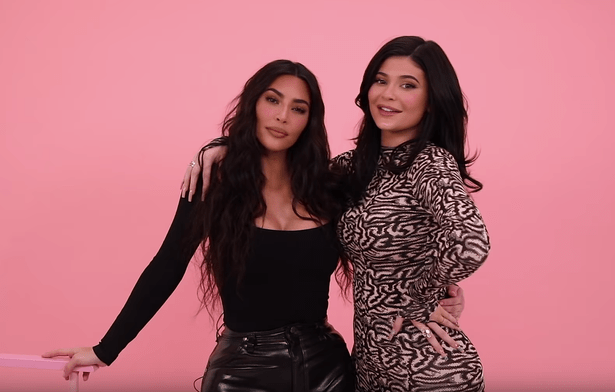 Kim Kardahsian has removed a post wishing her half-sister Kylie Jenner a happy birthday after Piers Morgan branded it “weird”.

The 39 year old originally shared a photo of herself and her sister wearing white t-shirts which had been doused in water to the point they were almost see-through as they stood in a shower with water spraying over them.

Both Kim and Kylie, who turned 23 on Monday 11 August, have their jet black hair soaked but their makeup seems to have remained in perfect tact in the steamy snap.

Writing above the image Kim, who recently returned from her make or break holiday with husband Kanye, said: “Happy birthday” before tagging her sister Kylie in the post.

As Piers, 55, re-tweeted the post he wrote above it: “So weird.” He then ended it with a hand pointing downwards towards Kim’s post to indicate what he felt was “weird”.

Piers’ tweet was shared more than 2,400 times by fans and some poked fun at Kim’s post as they sided with Piers.

One sarcastically wrote: “Don’t you post a photo of you and your brother showering when it’s your birthday ? I thought everyone did it….”

As a third said: “That’s an understatement. You’re being too polite…”

While a third chimed in with: “Also weird that she is promoting herself when sending her wish.”

Since Piers’ tweet Keeping Up With The Kardashians star Kim has deleted the post, but it is unsure what her motivation behind this was.

Kim later replaced Kylie’s birthday wish tweet with three different photos, one showing the pair wearing the jet black locks in matching, wavy, down hairstyles while looking up at the camera.

Kim is wearing a lace top with a corset-style tie-up choker, while Kylie appears to be wearing a black vest top.

Both the sisters opted for a neutral makeup look, with Kylie wearing a nude lipstick and heavy eyeliner while Kim donned a smokey eye and a glossy lip.

The second is a throwback snap of a teenage Kylie having her cheeks squeezed by Kim, who is pouting next to her. 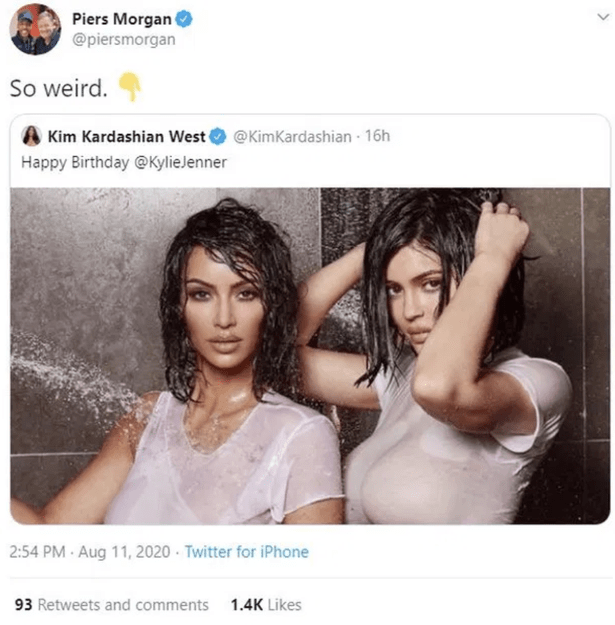 While the third picture sees the pair posing in a lavish back garden. Kylie is wearing a tiger-print blazer shorts set with a black bra underneath while Kim is dressed in a nude tight-fitting dress.

The mum of four penned the same short but sweet message to her sister above the image as her original tweet as she said: “Happy Birthday @KylieJenner”.

It comes after reports Kim is set to divorce her husband Kanye by the end of the year.

After the pair jetted of on a make or break holiday, an insider said: “Kim thought that time away with the kids would remind him of his most important job – being their dad. 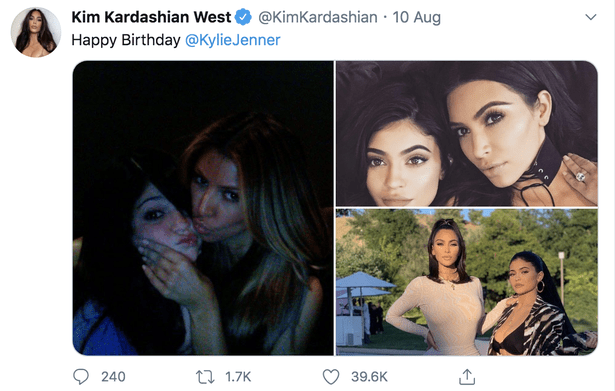 “She even offered to fully support a 2024 run for president if he got help and listened to the political consultants they hired.

“But Kanye seems set on what he calls ‘God’s plan’ – that he becomes president. He’s saying it’s a higher calling.”

The insider continued to The Sun Online: “None of their friends can see the marriage lasting more than a couple of months if he ignores Kim and her requests and just goes ahead with what he wants, even if it upsets her.

“Nobody would be surprised, or blame her, if she quietly ended things by Christmas.”