Police in northern California shot and killed an unarmed 22-year-old man who was on his knees with his hands up outside a Walgreens store.

An officer in the city of Vallejo was inside his car when he shot Sean Monterrosa on Monday night, June 1, amid local and national protests against police brutality.

The officer was responding to a call of alleged looting when he shot the unarmed man, officials said.

Police said an officer mistakenly believed Monterrosa had a gun, but later determined he had a hammer in his pocket.

The killing of Monterrosa, who lived in San Francisco, has sparked intense outrage in the Bay Area, particularly in the city of Vallejo, a city with a long history of police violence and high-profile killings and excessive force complaints, The Guardian reports

“When confronted by the police, he dropped to his knees and surrendered, and they fired at him,” said Melissa Nold, a Vallejo civil rights attorney representing Monterrosa’s family.

“He wasn’t doing anything to warrant it. They shot him from inside their car. What opportunity did they give him to survive that situation? … It’s egregiously bad.”

In a news conference on Wednesday, two days after the killing, police chief Shawny Williams said officers were responding to a call of possible looting at the pharmacy shortly after midnight when an officer in a cruiser drove up and saw a dozen people in the parking lot getting into a car. A second officer in an unmarked car drove up and found Monterrosa, who was still on the scene, who then kneeled down and started to raise his hands. At this point, the police chief said, this officer “perceived a threat” and fired five shots through his window at Monterosso.

Monterrosa died at the hospital, the chief said. 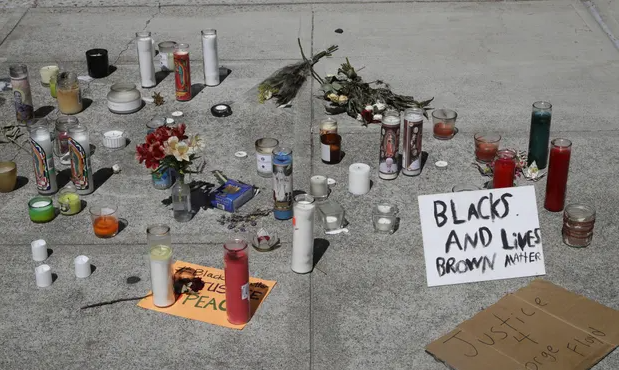 The chief declined to identify the officer who killed Monterrosa, saying only that the officer was an 18-year veteran of the force. The chief also dodged questions about whether he considered the shooting to be excessive force and ignored questions from angry community members who showed up to a press conference.

The last person killed by Vallejo police was Willie McCoy, a 20-year-old who had been sleeping in his car in February 2019 when six officers fired 55 bullets in 3.5 seconds. One of the six officers who killed McCoy, a rising rapper in the Bay Area, had previously killed an unarmed man who was fleeing on his bike. Another Vallejo officer killed three men in a five-month period and was subsequently promoted.

A memorial in front of Vallejo’s city hall has a sign reading “Blacks and Brown lives matter”.