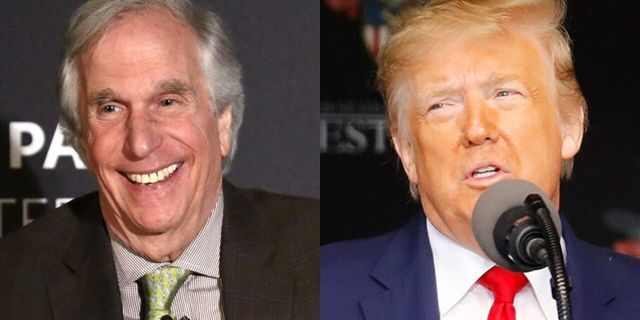 The US president’s health was the subject of public debate earlier this month, when a video circulated of Trump seemingly struggling to raise a glass of water to his lips without the aid of two hands.

In a campaign rally over the weekend, however, Trump paused his speech to take a drink with one hand, prompting cheers from the crowd. He then threw the glass away to the side, which was met with more cheering.

@realDonaldTrump thank you for the inspiration 🙏🏼 #DreamChasers pic.twitter.com/FWbvp26Dzk

In a video posted on Twitter by former Happy Days star Winkler, captioned “One Hand”, the actor can be seen impassively raising a glass to his lips and drinking.

Within 10 hours of being uploaded, Winkler’s video had been watched by more than two million people.

Bautista’s parody was even more derisory; the Guardians of the Galaxy star filmed himself psyching himself up for over a minute to the sounds of dramatic backing music, before also lifting a glass of water to his lips and drinking.

Others have also reacted to Trump’s public demonstration of health with ridicule and disbelief.

The Wire creator David Simon wrote on Twitter: “Fun is fun, but we’ve really lowered the bar for leading a nation of 330 million souls in the nuclear/digital age to a terrifying point, haven’t we?”